There was once a Nikklari named Grek. Grek wasn’t the smartest Nikklari in the Empire, but he was pretty charming. He lived in the greatest cave in The Hollows, which was filled with many Nikklari families and homes. It was essentially a small city. Grek was different from other Nikklari. He coveted all manner of small trinkets and jewelry. Many Nikklari are content with what they already have, or only look for what they need to live, but there are some like Grek that always look for more.

It was on a summer day when Grek chanced to travel to the marketplace, to see if he could find anything delightful to take home with him. He chanced upon a golden scarab charm with a small gem embedded in it. Immediately he knew it was shiny enough that he must have it.

Grek was caught trying to steal the item. It was not the first time Grek was caught. A new Nikklari threw the book at Grek in an attempt to make a name for themselves as taking a strong stance against theft, and Grek quickly found himself exiled from his home.

Grek was heartbroken, and would wander the lands to the west of the Nikklari empire, eventually heading south and settling in Manasarwati. Grek enjoyed the materialistic nature of many of the people there, and eventually, he met another Nikklari wandering the Manasarwati lands. They would fall deeply in love, and find themselves married.  Grek would find work as a successful merchant.

One day, while in the marketplace, Grek was stunned to find the very same charm he’d tried to steal for sale by a neighboring merchant.  Grek thought of how much his life had changed because of this charm. He bought it immediately, and brought it home. Grek would keep the charm the rest of his days as a reminder of where he had come from. Eventually, Grek gave the item to a trusted apprentice, so that it might bring them luck. 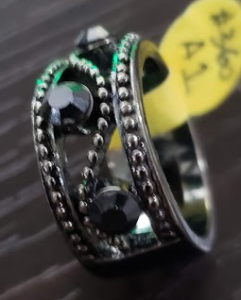 One morning you awoke to find this ring among your possessions.  Upon examination of the ring, you seem to have conflicting memories of how you gained it.  It is undoubtedly magical, but every time you sit to think about it, how you acquired the ring seems to change.

You have a memory of winning the ring during a particularly high-stakes game of Liar’s dice.  You angered its previous owner quite a bit: a woman named Myra. She claimed you cheated. As you think about it, she might be right.

You have a memory of finding the ring on a chain around a hobgoblin’s neck.  It was a hard fight, but the creature fell to your efforts and those of your companions.

You have a memory of receiving the ring from a dear friend on their deathbed, after becoming afflicted with a terrible illness. You cry as you feel the pain of the loss of a loved one.

You recall always having the item.  It was a gift from your parents.

You remember ice running through your veins as the Censharu murdered those around you.  Kavarek was winning the war, and there was nothing you could do to stop it. You clutch your lucky ring tightly.

The shifting realities have done something to this ring.  Has is been dislodged from its home reality? For reasons unknown to you, it has found a home with you.