Traders hailing from Kell have been asked about what is going on in the north, and have generally had the following to say:

While the storm in the north has stopped growing, the conflict between the Romani and the Barbarian tribes of the north seems to continue daily.

There has been no word of outright war, especially since occasionally the Romani have been seen walking alongside Elementals themselves.  The skirmishes that have occurred have been fairly even in their matching.  Despite the Romani’s unscrupulous tactic of having some elemental support, the tribesmen of the north are known for their tenacity.  No ground seems to have been given.

A map has been circulating, showing the rough borders of the storm.  But one thing is clear: ONLY the Romani have been able to get anywhere near the walls of the storm.  Even fewer select Romani have supposedly walked through the walls of it.  Travel anywhere near by non-Romani is not only ill-advised, but considered undoubtedly fatal.  Anyone travelling near or around Kell has been strongly advised to travel no further. 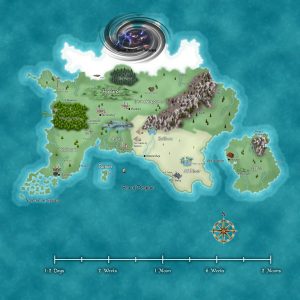 Elemental Storm in the North