Flowers of the Wayward Son

Hello all! All who attend this upcoming event shall be eligible for a drawing in order to win a magic item. For our last WCATSP drawing this year, we will be having two drawings for two separate items!  These items will be auto-attuned, and ready to use for the next event you attend. 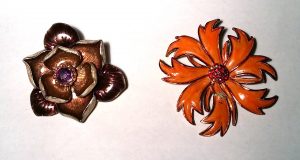 Flowers of the Wayward Son

A long time ago, a man named Aldin Einhard had a successful practice as a jeweler.   He specialized in crafting small, beautiful flowers made of gold that he painted into various colors.  He had a beautiful wife, Sabine, and a young son, Simon,  both of whom he loved dearly.

As the man watched Simon grow, he taught him the secrets of his trade.  He taught Simon everything about the process and craft; from the finesse required to work the metal into such small forms to the proper way to pitch to a prospective buyer.  Simon was a fast learner and took to the lessons easily.

All was not well, however. While Simon was adept at learning the skills his father taught him, he didn’t have the same passion that his father did for the craft.  Aldin loved seeing the look on a customer’s face when they had an item they truly loved.  He wasn’t concerned as much with making coin as he was with creating a finely crafted product and ensuring it went to the right owner.

Simon had an eye for coin that his father did not. So, as Simon grew into a man he and his father would fight often about what was right for the family business.  Aldin fought hard to keep his son away from what he thought would be a bad path, but Simon continued to focus only upon how much coin could be made from his work.

Eventually, this culminated in father and son going their separate ways.  Aldin continued his small business as Simon’s business grew and grew.  He stepped away from making the small flowers that his father was known for, and moved onto specialized, expensive pieces made for the rich and noble citizens of his city.

One day, rumors of his son’s disappearance came to Aldin.  Aldin was an older man now.  It had been 10 years now since he and his son had spoken, and it was near to his son’s 30th day of birth.  Aldin travelled across the city to where his son’s shop was, to find that its doors were shuttered, and the building seemed abandoned.

Aldin found a way into the building and found Simon’s journal in the living quarters above the shop.  The latest entries talked about wanting to break into the even more lucrative business of magic item creation.  Simon was always looking for an angle though, so he wanted to find someone who could assist him in the creation of items that would be the envy of the world over. He sought the tutelage of Yazil the Mad.  The last entry into the journal was made over 6 moons prior to Aldin finding it.

Despite all that they had been through, Aldin immediately set off to find his son.  It was summer at the time and the weather was the brutal sort of hot that one talks about for years after the fact.  Aldin soldiered through the beautiful weather and harsh terrain until finally reaching the edge of a thick forest, the center of which was rumored to contain Yazdil’s Tower.  Aldin would travel to hell for his son, like any good parent would.  Aldin stepped into the forest without hesitation, not looking back.

For days Aldin wandered the thick forest, noticing to his dismay that there wasn’t a single sound to be heard from any animal life.  All that he could hear were his steps crunching along the path. As his supplies began to dwindle, he came upon a clearing in the forest.

There was a body lying in the center of the clearing.  As Aldin approached, it became undeniable to his eyes that it was the body of Simon.  He was certainly dead, but there didn’t seem to be any evidence of wounds on the body.  There was no sign of decomposition either.

Two Flowers, beautifully crafted just the way his father had taught him, with a small note attached that read as an apology to his mother and father for becoming distant.  One was meant for his mother, and the other, his father.

Aldin couldn’t bring his son’s body back with him through the woods over such a long distance, so he did the best he could to bury his son, as no father should ever have to, and journeyed home.

The Purple Flower grants you the following abilities:

– At 4PM the Saturday of an event, irresistibly fall to the ground crying for 30 seconds, after which, gain 10 magical armor (or +4 Magical Armor stackable to your current if you have 10 or more magical armor).

The Orange Flower grants you the following abilities:

– At 4 PM the Saturday of an event, you are irresistibly overcome with anger and unable to attack or cast spells for 30 seconds, after which you gain 10 magical health (or +4 Magical Health stackable to your current if you have 6 or more magical health).