Amber Eye of the Golden Construct 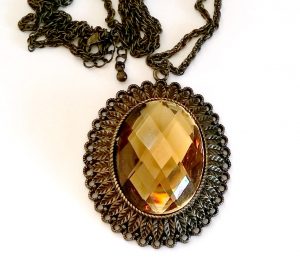 Amber Eye of the Golden Construct

It is believed by many that Borain’s realm itself is guarded by towering constructs made from solid gold that gleam with the light of creation.  While gold is normally considered a soft metal, the strength of these creatures is supposed to be terrible beyond compare.  Besides their strength, they are said to command magics of every sort, as Borain would spare no expense to guard the treasures of his beloved realm.

Unfortunately for Borain, the greatest thief Manasarwati had ever known, Mad Man Miles, had found himself growing bored with normal heists and various petty pilferage upon the populace.  He had grown tired of all the mundane work he’d be doing, and he’d made more coin than he could spend in seven lifetimes. So, he took upon a challenge.  He would steal from the very God of Greed himself.  But what sort of treasure would show to the world what sort of great thief he was?

Miles, being the man he was, decided he’d simply up the challenge by figuring it out on the fly.  The stories vary greatly as to how he found himself within the deepest, most well-guarded vault in Borain’s realm.  Some believe he was the chosen of Ethali himself, Some believe that Elantrai had chosen him as hers.  There are some still that say Elantrai and Ethali fought over the man.  Miles himself never declared personally for any god, saying his own personal skill got him through.

All can agree however,  about what he took from Borain.  Mad Man Miles believed that simply stealing one of Borain’s (or really, all of Borain’s) most valuable treasures was simply a bit much.  He had enough money.  A flash of inspiration hit him.  He would steal an eye from the largest of the guardians that kept watch over this secret place.  He would do it just to show that he could, and he would leave everything else intact and untouched.  So, he did just that.

Miles wasn’t a man known for his modesty, so it didn’t take long for Borain to figure out who had dared to mar his most precious construct.  Borain is also not known for being forgiving, so, man and life were soon parted.  Nobody was ever able to figure out who stole the Eye at Mile’s wake.

You’re still unsure as to how it ended up in your hands.  A courier approached you with a package with this inside it.  After accepting the package, and opening the contents, you looked up the find the courier gone.

– This item shall also feature a hidden ability that shall only be revealed to the person that wins the item.  Good luck!